How much does James Cameron ride George Lucas’ dick? Only enough to base an entire movie, Avatar, on the final battle sequence from the last good film in the Star Wars franchise, Return of the Jedi. Each film has its ragtag band of native creatures, each film pits basic bush weaponry against mechanized slaughter machines, each film has exploding trees. But here’s the real question: who kicked more ass, the Na’vi or the Ewoks?

SPOILER ALERT: This post may include revealing details of Star Wars: Episode IV – Return of the Jedi (1983). And if you haven’t seen Avatar (2009), I’d love to know your mortgage obligations on that cave in Antarctica.

When it comes to depictions of comfortingly anthropomorphic nature-loving creatures on a moon, we should know by now that Hollywood takes a purely American standpoint to race relations. Despite each film being set in either the distant future or a long time ago, the locals have some kind of spiritual awareness and one-ness with nature that we’ve just stone-cold raped and abandoned here on Earth because of our couch-potato, SUV-driving, gadget-addicted ways (though The Force is universal). That all represents a regression, you see, and petting the plants and animals in a loincloth is real, true living (I’m looking at you, Brauer).

In order to overcome the evil, evil baddies with their military industrial complexes and small genitalia syndromes, the locals need the leadership of a violently-inclined, handsome White Man. This is a given. But within that not-so-democratic militant insurgency, how do each of the alien races match up? Let’s do a comparison:

Physical capabilities: The Na’vi are ten feet tall, admirably lithe, have impressive athletic abilities, can breathe the local atmosphere, eat dinosaurs and possess carbon fiber bones. Their arm length also gives them a better range when using the bow and arrow. They also speak English (BIG advantage in the 22nd century). The Ewoks have a tough matted fur and may be herbivores. Opening point goes to the Na’vi. 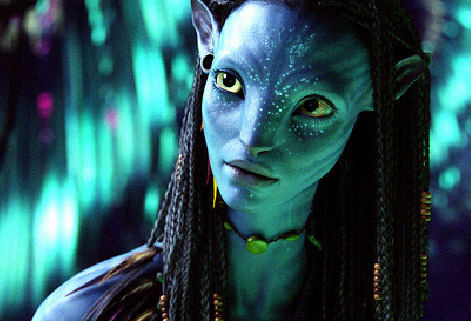 Physical attractiveness to the White Man who will lead them: Herein lies the quintessential question of attractiveness – sexy or cute? The Na’vi have tight, athletic bodies, they wear skimpy clothes, they look like cats and they have anime eyes (not brown). So they’re hot, in a light-skinned blue people sort of way (read: not black), or at least hot enough for Jakesully to bone the princess. (Personally, I think he should have played the field a bit longer, you know, seen what’s on offer. After all, we are never introduced visually to a viable female competitor to Neytiri and the grass could be greener, er, blue-r on the other side.) On the other hand, despite their beady little eyes, the Ewoks are cute, cuddly and instantly lovable – 30 million Ewok lunchboxes sold and counting can’t be wrong – but they also have strength and courage in wartime. They’re like Teddy Ruxpin after hitting the gym hard for 6 months and doing a tour in Anbar province, and they convince the lady the White Man wants to bone (Princess Leia) that they are worthy. And The White Man knows that keeping the princess happy keeps The White Man happy. However, at the end of the day, cute can only very rarely be sexy, while sexy can easily be turned cute (hence the anime eyes). The Na’vi have it.

Extra Sensory Perception: When Leia first gains the trust of the Ewok by feeding him stale oyster crackers, he senses the hidden Stormtrooper snipers and ducks before they can fire. The entire Na’vi population, on the other hand, despite being able to fiber-optically interface with the whole goddamn planet, can’t detect an entire fucking armada of obnoxious flying machines until they come around the mountain into plain sight. The bugs in Aliens and Starship Troopers showed a bit more mental pluck than the Eiffel 65 rejects. Honk if you smell Ewok comeback! 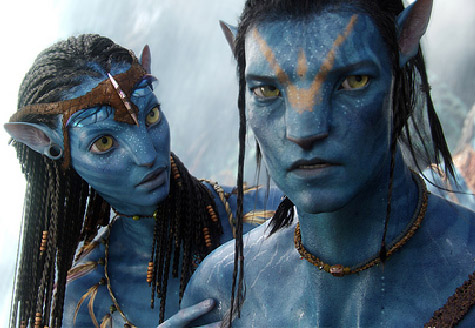 Battle tactics: Why, oh why, must the underdog force always charge headfirst at the waiting enemy, thus suffering massive unnecessary casualties? Because it’s somehow more “honorable”? These are wars of attrition, folks, you win the way you can. I ask you: who won in the end: The Wolverines of Red Dawn (aka Al-Qaeda in America) or Tom Cruise and co. in The Last Samurai? Here, again, the Ewoks (unlike the rebel fleet flying above them) display much more tactical ingenuity, turning a hostage situation to their advantage, staging ambushes and hit-and-run style attacks, and using the enemy’s superior weapons against them by grabbing the lasers of fallen stormtroopers and commandeering speeders and AT-STs. The Na’vi run straight at the guns on their horses, or fly right into a mass of blasting helis, and subsequently get their asses kicked before being rescued by a bunch of sleep-deprived bird-dragons. If I shed a tear for each of the unnecessary Na’vi deaths, it would’ve filled the theater. The Ewoks tie it up!

Technological ability: In terms of living facilities, the Ewoks’ decentralized network of tree houses is the more sophisticated solution for forest dwellers. They are far easier to defend, move among, repair, relocate and reassemble than the ginormous Na’vi Hometree, as epic as that tree may have been. In their battle against Stormtroopers, armored AT-ST Walkers and speeders, all bearing lasers and precision guidance systems, the Ewoks showed a remarkable ability to create log-rolls, trip wires, somehow hung gigantic trees in the air (a marvelous feat of engineering for 3-foot tall furry circus rejects), fashioned flying devices for rock dropping and so on, all on very short notice. The Na’vi couldn’t think of any of that, despite that famed collective intelligence, and really didn’t use any of the natural environment around them to their advantage. Perhaps there’s some message in there about them not needing to fight or make weapons or something on their peaceful Pandorra, but then what’s with the tribal competitiveness? So much for that one-ness. The midget bears take this one.

Persuasive abilities regarding dangerous creatures: In most arenas, the big unknown is whether the lion/tiger/bear mauls you or your enemy first. While no vicious creatures seem to live on Endor, the other gnarly orthodontist’s nightmare of Jedi, the Rancor, played for their team, not ours. To extrapolate, the Ewoks may have kept small lizards as pets, but otherwise the wild animals decided to get the hell out of dodge when the shit when down. On Pandorra, however, the Na’vi can link their braid to many fearsome beasts such as the flying bird-dragon, the six-legged horse, the giant puma/doberman and the even bigger bird-dragon. In light of their apparent disregard for either technical cleverness or tactical creativity, this is their biggest advantage yet. Yee-haw, ride ’em Na’vi! 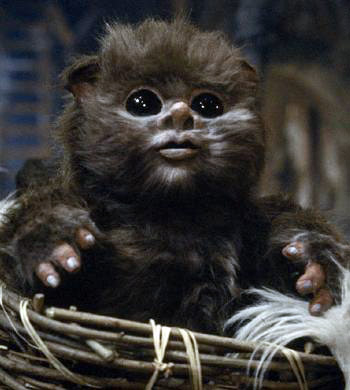 Openness to monotheism or religious conversion to such: Sorry, but in Hollywood not only does the White Man need your people to be bone-able and willing to be led to the slaughter, but he also needs to know you believe in One White Old Man Flying In The Sky in order to trust your pinko tree-hugging asses. The Na’vi believe in some real hippie shit, some kind of pantheistic earth mother organic crunchy one-ness that sounds great in Williamsburg or Silverlake, but look, is it going to defeat Islamic extremists or Chinese gunships? I mean, the Na’vi even say that Mother Nature will only maintain the balance of life – whether that includes us or not is just not written down in a book that we must obey. They don’t even write at all for Christ’s sake! The Ewoks bow down to a Golden droid (the White Man’s most magnificent creation, an image of himself, only more perfect) floating above them yammering like a crackhead – in a very White Old Man voice. I think we know who’s with us and who’s against us. Most impressive, young Ewoks. 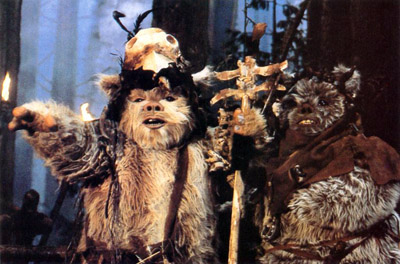 Ability to “Finish the Job”: When Big Bird-Dragon Rider Jakesully and the Na’vi defeat the ugly American army types and their corporate boss on Pandorra, they send them packing back to… the orbital death platform to stage a massive counterstrike/nuke-the-whole-site-from-orbit-it’s-the-only-way-to-be-sure? At that point in the film, I wasn’t exactly convinced things were “over”, though I had to pee so badly I literally sprinted out of the theater before the credits even began to roll, so “so long folks” was good enough. In retrospect, leaving it open-ended foreshadows the possibility of a sequel. But c’mon, if the whole message of Avatar is this condemnation of corporate exploitation of natural environments/peoples, yet this the most corporate, big budget consumer blockbuster success ever conceived, hasn’t an equally wasteful sequel already been shot? Mixed messages anyone? In Jedi, however, the Ewoks git ‘er done, as they say, taking out the shield generator, thus allowing the Rebel Alliance to blow up the Death Star and save not just the forest, but the entire fucking galaxy. It’s all a matter of scale, and in this case the little furries go B-I-G. Ewoks: Mission Accomplished.

About the author Dan Freeman