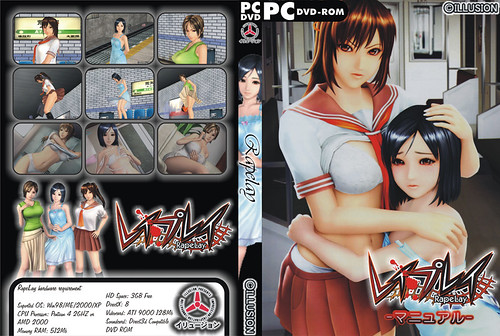 In Rapelay, you play a stalker and rapist who follows a family (a mother and two daughters) from train station, to public bathroom, to hotel, one-by-one isolating and violating them. Using Peruvian shamanistic powers, you can summon a wind to lift their skirts. You then grope each woman on a train, and stalk them to a private area where you can finish the job. Points are awarded by the number of times you ejaculate into each victim, and over the course of the game each woman learns to enjoy the rape, eventually becoming your sex slave.

Obviously, reprehensible doesn’t even begin to describe this one. The game achieved notoriety when someone found it listed on Amazon, and now NYC Council Speaker Christine Quinn is calling for a statewide ban of the game.

Thanks for ruining video games for everyone, Rapelay. Just when video games started sneaking away from The Controversy Spotlight, here you are shoving us all back into it again. Its fascinating and depressing that in this (comparatively) fledgeling medium each game comes to represent all games, becoming in effect an ambassador to all video games and gamers. We don’t call most moviegoers and cineastes perverts because porno movies exist, nor do we damn the entire medium over Ron Jeremy’s canon. Yet, that’s where we still are with video games. So, yes, one game can ruin the medium, or sour it quite a bit in the eyes of millions.

More info about the game that caused me to lose my faith in humanity, after the jump.

The story begins with Kimura being arrested for groping Aoi on a subway train. His father is an important politician, and manages to get his son released from jail. The next day, Kimura waits outside the Kiryuu family house and listens to their conversation. He follows Manaka, the youngest, to the subway and gropes her on the train. After getting off the train, he traps her in a public bathroom and rapes her, taking pictures of her semen-covered naked body with his cell phone. Kimura instructs Manaka to feign sickness the next day, and stay in her room.

The next day he follows Yuuko, the mother, from her house to the train station where he fondles her on the train. Kimura follows her to the city park, when Manaka calls Yuuko on her cell phone. As per his plan, Manaka tells her that she is in the bushes at the park, and when Yuuko walks towards the bushes, Kimura ambushes her and ties her up. He then rapes her in the park, and takes pictures of her semen-covered naked body before handing her over to his gang of helpers on the side, who detain her for him.

The third day he follows Aoi, the oldest daughter, to the train station and shows her the photo of her tied up mother. Shocked, she can only follow his orders as he gropes her on the train. After getting off the train, she asks Kimura why he is doing this, at which point she remembers he is the chikan who was arrested for molesting her. Getting on a vehicle, he and his helpers take Aoi to a hotel which his family owns, and rapes her, again taking photos.

After having his way with Aoi, Yuuko and Manaka are taken into the room via a secret door. With all 3 captured, he reveales his plans to make them his sex slaves. Of course, Yuuko tries to cover for her daughters, but breaks down in the end, Manaka breaks next, and finally Aoi as well.

A Fantastic Leigh Alexander Slate Piece On the Game

12 thoughts on “Rape: The Videogame”