Quantum of Solace – Back to Basics 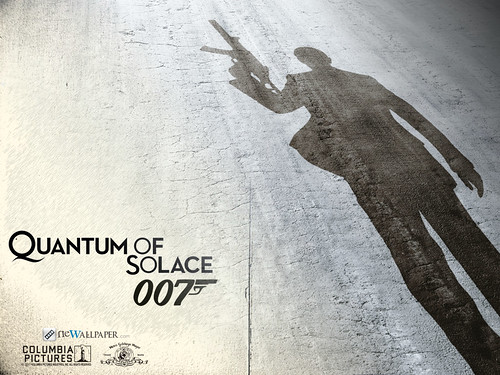 Alright so here is the really cool news. Victor and I have officially made it into the list of press bloggers. We’re now a few of the people who get to go to movie premieres, test out new board games & video games, and generally get fun stuff in the mail. We feel like minor VIPs! With our new powers we got the chance to check out Quantum of Solace (press edition). A thoroughly fun and mediocre Bond flick. I was hoping for the intelligent plot line to continue on from Casino Royale’s slam dunk, but unfortunately it falls short. However, a couple of the action sequences are inspired, and deserve being seen by fellow Popcornites.

So where to begin… Well standing in line for popcorn sounds like the best way to go. The cinema was a buzz with two big premieres of Quantum happening in parallel theaters. The people in line all were carrying little laptops and pocket keyboards and all kinds of journalistic gear. They all knew each other from the hundreds of other screenings they’d all been to in the last few years, and they all had bracelets of varying colors to signify their extra worth.

Actual Review after the jump:

It’s funny how this little community goes every few days to sit and watch the next big thing. I wonder how well they all know each others movie tastes by this point? Does anyone out there have a favorite critic these days? I feel like I just drop onto RottenTomatoes, check out the aggregate scores, read a handful of capsules, and that is pretty much it. I never think too hard about who is who (although trying to get journalists to watch my film has been such a challenge I would go crazy if a handful would just turn their heads).

Quantum was just starting as I sat down. The beginning is appropriately frenetic and mind jarring. The classic intro credit sequence is reminiscent of older Bond films like a mash between View to a Kill and another one that doesn’t quite come to mind. The opening song is fantastic though with sweet performances by Jack White and Alicia Keys. Which makes me wonder why they haven’t teamed up before.

So the film loses itself early on with an explosion of action that means nothing. I’m all for shoot’em ups, but the purpose of this new breed of Bond is to be real. There are supposed to be intriguing characters that do battle against one sided villains. That’s the catch, and the film seemed like they were falling back into old Bond. Old Bond is a tried and true land where you immediately know that what you’re seeing is impossible but fun. This is the fatal flaw, and why it couldn’t attain much greater heights.

Here is a Bond who is tough, interesting, and all around made up to become your classic tragic hero archetype. BUT he’s confused as to what movie he is making. Is this a story about revenge? Is this just a stepping stone to showing luxury markets what to buy? Are we to believe that Daniel Craig is mortal, or is he completely invulnerable like all Bonds? In the last film Craig gets scraped up pretty bad, and looks generally like hell sometimes. True to form we get more of the same, although I miss the massively painful ball busting scene from before which had me in pain.

The bottom line: The punches in this one don’t count. The long chase sequences are inspired, but not quite as much. The fires, gunshots, and parchuteless jumps that he endures don’t make him limp. The pain doesn’t feel real, and I want this Bond to feel the real world as I know it.

The actual action is good with a really cool sequence of boat jumping to boot. A couple of fun “ooh” and “ahh” moments almost make you a believer. Problem is, just like agnostics, I don’t know what to believe anymore (just kidding agnostics). The moment of zen has to be that shot from the trailer where they bust through the glass ceiling. Definitely stands out, and shouldn’t have been given away as just a teaser for the film.

Finally, Bond’s buxom-y babe is not quite up to snuff. Through no fault of her own I might add. She certainly has allure, but you just have no idea what she’s doing there. Her motives for staying around are not exactly clear, and the revenge story she has is flimsily slapped on the side of this thing to give it more weight.

In the end though I think the editing room must have been a strange place where execs and the director came head to head. Not that I can claim to know. There is artistic license given in places where there shouldn’t have been. Nonsense shots of slo-mo horses and slo-mo operatic sequences parallel action in bad ways. The problem is Bond doesn’t interact with thes environments they spend so much visual exposition on. If Bond were to actually interact with the horses in some way, or get hit by one, or run across the opera’s stage, it may have made sense. As it was it felt like an editorial flourish. This happens a couple of times to my dismay.

Finally – the finale. The movie is over, and they hit you with one last scene. If you’re going to be talking about THIS moment an entire movie long at least make it worth it. By this point I’m in my seat feeling a lot like an existentialist: A distressing sense of disorientation and confusion in the face of an apparently meaningless or absurd world.

Anyways, I know I’ve been a little harsh. In this world if you’re not anything less than perfect it can get a little critical. All in all good show our expectations were just a little high.

So NEW Bond – What’s it going to be for the next one?

10. An action sequence that uses a great remix of the original bond theme (missing in this one sadly)
9. Bring in another double O agent
8. Have Dench finally declare her love for Bond
7. Give Paul Haggis more creative license to write his Bond
6. Give the director Marc Forster 1 more film.
5. Make the punches count!
4. A villain who plays more into a grey area of good and evil
3. A Bond girl that’s not a damsel or a hard ass
2. More witty interchanges between 3 dimensional characters
1. More Daniel Craig – Less Bond

9 thoughts on “Quantum of Solace – Back to Basics”