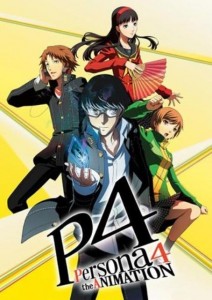 Persona 4 was released for the PlayStation 2 on 2008.07.10 in Japan, and 2008.12.09 in North America (and 2009.03.13 in Europe). This became one of my favorite PS2 games, and because of this, when I first heard that there was going to be an anime series, I was really excited. However, I was also cautious due to the fact that there was previously an anime series based on Persona 3, entitled Persona -Trinity Soul-, which ended up being nothing like what we were hoping for, in a bad way. The P4 anime has premiered already — in Japan anyway — and how is it?

One night while we were watching Final Fantasy VII: Advent Children Complete together, Tanya said that more Final Fantasy games should be made into movies or such, for those who don’t want to play a 50+ hour game. While not Final Fantasy, this is exactly what Persona 4 The Animation is — a retelling of the game’s story, in anime series form, without all the level-grinding.

P4 is set in 2011 rural Japan, where a high school student moves to the fictional town of Inaba to live with his uncle and cousin, while his parents work abroad. At school, rumor has begun to spread about a mysterious TV program, called Mayonaka TV (or as it was translated in the English dub of the game, the Midnight Channel). Rumor has it that watching a switched-off television set on rainy midnights will reveal a person’s soul-mate. However, days after the young man’s first viewing, unexplained murders begin to take place in the quiet town, where bodies are found dangling from television antennas and their cause of death unknown. He soon discovers he can enter the TV. What will he find?

Persona 4 The Animation, the acronym for which is universally P4A, premiered on Wednesday, 2011.10.06 with 3 channels airing the episode, one channel per night (the 6th on MBS, the 7th on TBS — no, not the American TBS, and the 12th on CBC). Due to Trinity Soul, there was skepticism regarding P4A. To help address fans’ concerns, beginning several months before the series premiere, roughly a dozen (I honestly lost count) trailers were released, each showing events from the game animated, with several trailers being released on important dates from the story, featuring that night’s Mayonaka TV. All the trailers told fans that P4A would follow the game’s story, unlike Trinity Soul.

I was really hoping P4A would be simulcasted, so I could watch it. To my dismay, there was no news about this… That is, until about a week or so before the premiere, when it was announced that the series was licensed for North American distribution by Sentai Filmworks, and that The Anime Network would be simulcasting the show every Thursday at 3PM EST (meaning we get the TBS airing). For a few weeks, around 3PM, The Anime Network’s site went wonky, which leads me to believe that a lot of people went there to watch P4A, causing server issues. This was a good thing, because the show’s popular, but it was still frustrating. Fortunately, or unfortunately depending on how you look at it, the wonky-ness has since gone away.

Most of the music in the anime is from the game. In fact, the opening theme (OP) of episode 1, “Pursuing My True Self” was the opening theme of the game. This helped connect the anime to the game. The more recent episodes are introducing new music. The music was composed by franchise veteran, Meguro Shoji. The series’s OP, “Sky’s the limit” is performed by Hirata Shihoko, who did the vocal tracks for the game’s soundtrack, and the ending theme (ED), “Beauty of Destiny” is performed by Hirata and Lotus Juice, who is best known from the Persona 3 soundtracks. Lotus Juice also wrote the lyrics for both the OP and ED.

Character designs stay true to the game. They are pretty faithful to those of Soejima Shigenori. Also, the majority of the original Japanese voice cast from the game returned to reprise their respective roles in P4A. I personally verified this by playing the Japanese version of the game. So far, the only character whose voice is different is the gas station attendant in episode 1. While it was licensed before its Japanese premiere, there is no word on whether or not the game’s English voice cast will return, like their Japanese counterparts. Not as of the writing of this post at least.

Now that the facts are out of the way, let’s move on to my thoughts on the series. In MegaTen games, the main character is nameless and is named by the player. In its manga (Japanese comic), Persona 4‘s main character was named Seta Souji. For the anime however, it was changed to Narukami Yu. Personally, I’m not sure how I feel about the name change, but it is what it is.

I’m really glad that the original voice cast returned for the anime, because that makes it all the more authentic. The dialogue is very similar, if not the same in some parts, as that in the game. Narukami’s dialogue, while minimal compared to other characters, is very well done and at times, it is one of the dialogue options that you can choose, in the game.

The series can’t be an exact adaptation, so there are some differences. Some of these changes are good, while others notsomuch, not that they’re necessarily bad. One such example is that certain parts of the story are told much much better in the anime than in the game. Case in point, episode 4. We never experience the flashbacks that are in this episode, and in my opinion, the flashbacks make the episode more powerful.

The fights in the show are very well done, although they play out a lot differently than their counterparts. The major battles are much more emotional, and Personae stay out when summoned, whereas in the game where they go back into the character after taking action (either attacking or using magic). My only nitpick about this is that in the anime, the characters don’t fight Shadows (the blanket term for the monsters in Persona 3 and 4) themselves. They just use their Personae to do so. Then again, fighting Shadows with gollf clubs and such would look strange in the anime.

As someone who has played the game, the overall pacing of the series (especially the first 4 episodes) feels rushed, because stuff that takes us a while to do in the game, happens quickly. However, that is not to say that I don’t understand it. As just a viewer, I admit that it is a good pace so they can fit the story into 25 episodes, which according to The Anime Network, is how long P4A is scheduled to run. That said, I’m very curious to see which of the game’s multiple endings the series uses.

To break the series up from just fighting Shadows and such, there are episodes that focus on Social Link characters. In the game, S. Links are one way for you to get more powerful Personae. While this remains true in the show, that aspect isn’t as central. These, what I call “S. Link episodes” are more to show Narukami and other characters becoming friends, hanging out or what-have-you. These episodes can be anywhere from serious to funny, and while yes, they are basically just filler episodes, they’re also a good way to spread the story out.

My main concern with P4A is that the overall timing of the series seems too convenient. My reasoning is that in 2012, Persona 4 The Golden (basically Persona 4 Portable) and Persona 4 The Ultimate in Mayonaka Arena (a fighting game) will be released, for the PlayStation Vita, and the PS3/360 respectively. The complete run of P4A will take the series into 2012, so while I’m glad we got P4A, I can’t help but to think that this is just to help hype those games. I’m hoping I’m wrong, but considering how the world works…

Would I recommend watching Persona 4 The Animation? Absolutely. It doesn’t matter if you’ve played the game, or want to but just can’t commit to a 50+ hour game, you’re given all you need to understand.

Persona 4 The Animation is produced by AIC ASTA, distributed by Aniplex, and simulcasted every Thursday at 3PM EST, on The Anime Network. Registration may be required later, but it is free.