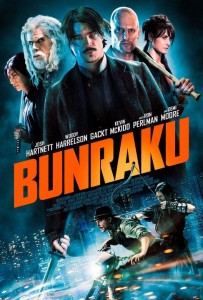 I first heard of Bunraku back in early 2008, when it was announced that GACKT would be in it. I didn’t expect the film to be out until the following year, so I put off my excitement until 2009. However, even that year passed with little news about the movie, as did most of 2010. Bunraku finally made its western premiere in September of 2010, at the Toronto International Film Festival.

Bunraku is a difficult movie to categorize, but if I had to, I’d call it a Western/Martial Arts film. I don’t know if I would call it an “all-star cast,” but it definitely is star-studded. The film stars Josh Hartnett, Demi Moore, Sugata Shun, Woody Harrelson, Ron Perlman, Kevin McKidd, and GACKT.

In a future where firearms are banned, a mysterious drifter (Hartnett) arrives in a strange town ruled by the ruthless Nicola (Perlman) and his army of thugs, headed by nine deadly assassins, which is topped by the vicious Killer #2 (McKidd). The drifter is soon forced to trust a young samurai (GACKT) looking to restore his family’s honor, and the local bartender (Harrelson) who has been secretly awaiting a dream team to help overthrow Nicola’s regime.

The title of the movie comes from a 400-year-old form of Japanese puppet theater. This actually plays a huge part in how the movie is presented. A prime example of this is the sets – They’re mostly computer-generated, and look over-the-top, giving them the illusion of being set-pieces that you’d find in a stage play. This helps to recreate the feeling that you’re watching a play, rather than a movie. This also limits what can happen in one particular scene, giving the movie a faster sense of timing.

The first scene is an absolutely amazingly choreographed fight sequence that plays more like a dance than anything else. What’s really interesting is that no fight is quite the same. In some, it’s nitty gritty, and in others it’s just fun to watch.

One thing I really enjoyed was how they handled subtitles. Although the movie is mostly in English, there are still a couple scenes with Japanese dialogue. With that said, instead of doing subtitles the traditional way — In the middle of the screen at the bottom — Bunraku does them in comic book text boxes. This helps to immerse the audience in the film’s unique world and atmosphere.

The most interesting aspect of the film though is its cinematography. From turning the normal way phone conversations are shown to scene transitions that make your head spin. This film’s director chooses to explore a completely over stylized approach, and somehow makes it work.

The music in the film was done by Terrance Blanchard. It’s dramatic when it needs to be, and at times, big-band-esque, but during fight sequences, it reminds me of the 1960s Batman series, where (almost) every impact makes a musical note. In my opinion, it helps to accentuate the picture’s theatrical sensibility.

While predictable at times the movie’s incredible sense of style carries it through. I recommend this movie if you’re looking for something with unique visuals, and can stand an almost-cliche plot. The DVD also contains a commentary audio track featuring Guy Moshe and Kevin McKidd.

Bunraku was written and directed by Guy Moshe, based on a story by Boaz Davidson, and is rated R. The film stars Josh Hartnett, Woody Harrelson, GACKT, Sugata Shun, Kevin McKidd, Ron Perlman, and Demi Moore. It was produced by Snoot Entertainment, Bergman Productions, and Picturesque Films. It was distributed in theaters by ARC Entertainment and XLrator Media.

Bunraku goes on sale today, 2011.11.01 on DVD and Blu-Ray and is distributed by Anderson Merchandisers.

I was given a DVD copy for review by ARC Entertainment, and I would like to sincerely thank them for doing so.