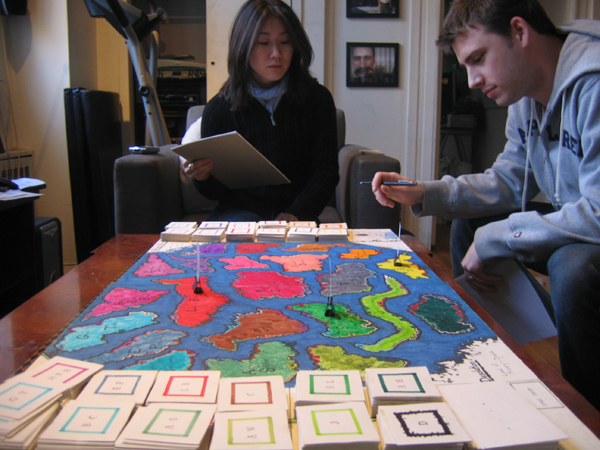 After a few weeks in a Christmas K-hole, I awoke to find Vic’s Top Ten Best Board Games of All Time list sitting on my chest and slapping me gently in the face. Given the explosive rhetoric at the end (that line about Robo Rally cut me deep) I’m fairly certain Poppa Ten was hoping to spark a flame war with me on the comment pages, or MAYBE even another Top Ten Duel like the Mario Debacle.

But this ain’t 2008, this is 2009, the year of the ox, so instead of jumping to the attack I chewed on my cud and thought about why Vic and I have such different perspectives on the art of the Board Game.

(all the cud you can handle, and ten Board Game Downers, after the jump)

Vic and I grew up in the same hood, and board games were often on the menu. But when we had to pick a box o’ fun to distract us from our otherwise suicidal Sunday afternoons, we usually went different ways. Vic tended towards the Loaded Questions of the world, whereas I would dork out (surprise) and go for the unpronouncable strategy monsters like “Carcassonne”. It took me three years of studying game design to realize that this wasn’t a coincidence… I am a curmudgeon when it comes to board games. I’ll try anything out, and if the mood is right I can enjoy anything, even Scattergories, but there are a few scenarios that will keep a game from achieving perfection in my eyes.

#10. The Game Includes a lump of clay

Sometimes you open up your board game and find a purple turd sitting in the box. While sculpting with clay for charades is, generally speaking, a great concept, it has a terrible side effect. I am guaranteed to get distracted by sculpting little bits of crap, and miss the rest of the game entirely.

#9. I am terrible at This Game

It may seem strange that this isn’t higher on my list. Don’t get me wrong, I don’t like losing, and I will sometimes get pissy when a game doesn’t go my way. But really, if I feel like I can get BETTER at a game, I don’t hold it against it if I suck. Sometimes (in the case of chess, for instance), my lack of skill actually inspires me to play more.

Offenders: Anything from Europe

There are some things, like a bag of Trader Joes groceries or a nice suit jacket from a thrift store, that really feel like good value for the price. Board games do not fall into this category. In 1995, I swear I never dropped more than a ten-spot on a board game… then apparently, while I was blinking, everything with a rulebook started retailing for $40 and up. It’s probably just that my tastes got expensive, but damn does this make it hard to try a game you haven’t played already!

A rulebook isn’t necessarily a bad thing. Dungeons and Dragons had two of ’em, and it’s one of the most popular games ever. But everyone knows you don’t learn games from rulebooks, you learn them from people who already played the game. Trying to understand a game from a rulebook is one of the most frustrating things EVER… and if the game can’t be explained on a couple sheets of paper, it is agony to try to figure out what the hell you’re supposed to do.

#6. There is no way to bounce back in This Game

This is one of the trickiest balances to pull off in a board game… if someone falls behind, how do you make it fun for them? They need to be able to recover. But if you take it too far, then players won’t even try to do well. Only a few games strike a great balance.

We’ve all played Monopoly, so we all understand the sad phenomenon of the “truce ending”… where players basically agree that it’s better for everyone if they just stop playing and get on with their lives. What a sad way to end a party! The final turns of a game can be the best part, if they’re done right. It sucks when a game squanders that opportunity.

#4. This Game makes me hate my friends

This one’s obvious, but sort of unquantifiable… it can happen in ANY game if the moon is right. But for some reason I cannot explain, Cranium has always been a culprit here… we’ve started out laughing, but at some point, one team passive-aggressively accuses the other of cheating, and the fun suddenly has an edge. Maybe it’s the whole “team vs. team” thing. This can also be a problem in extreme bluffing/betting games. If your BFF, with tears in her eyes, whispers “please believe I’m not the traitor” and then she IS, then the game has probably stopped producing fun and become, instead, a really efficient trust issue factory.

#3. I do not get to play a thimble In This Game

Offenders: Cranium, Other Games Too

With all due respect to Juan, Monopoly is not my favorite game, mostly for the reason below. But one thing it got right… it lets me move around the board as a thimble, an iron, a car, or a poodle. Amazing. Every time I take a turn, I’m a little happier. Why would I ever go back to being the “blue piece” or the “red piece” when I can be the motherfuckin thimble?

#2. This game is all about being lucky.

Games exist to bring people together in creative ways… so there’s nothing really WRONG with a game based on chance, as a way to pass the time. But dammit, I just want to feel like I’m doing SOMETHING in the meantime. I played a lot of Candyland as a little kid… so much that when I finally realized the game was playing itself, that nothing I did actually had any impact, I felt a little betrayed. It felt as if my friends and I had been duped into doing some rarefied, dressed up version of Nothing At All.

I want my games to be mental sports, not collective slot machines. A little chance is cool, as long as it’s about calculated risks… but when I feel like the game is playing me, like I don’t even really have a chance to do let the chances play out, that I don’t like.

#1. This Game expects me to be witty and impress my friends with my wittitude.

This is the real heresy, the full divergence from the Victor school, and I fully expect to be burned at the stake for it. I have seen some hilarious stuff in Balderdash, and I’ve written a funny thing or two. But something about that style of game truly stresses me out. There is definitely a skill involved, deeply related to improv comedy… and while the idea of improv scares the shit out of me, that’s not what I dislike about the genre. It’s the popularity contest aspect that brings me down. It’s a blow-by-blow showcase of your intelligence and humor, rated against your peers in wins and losses, and if you’re playing with more than two people, the odds are you won’t like the result.

Clearly I’ve narrowed the field a bit. If I don’t like showcasing, or chance, what’s left? I guess I want a little bit of strategy in my gaming… room for cleverness in the rules. I like chess, spades, Settlers of Catan, and yes, Robo Rally… anything that requires some attention from the group but still leaves room for fun. Really, it all comes down to this: being able to look across the table at the end of the last turn and say, with no hint of sarcasm, “good game”.

That, and a thimble. Those things are the best.

About the author Jamie Antonisse

I was born on a Tuesday.