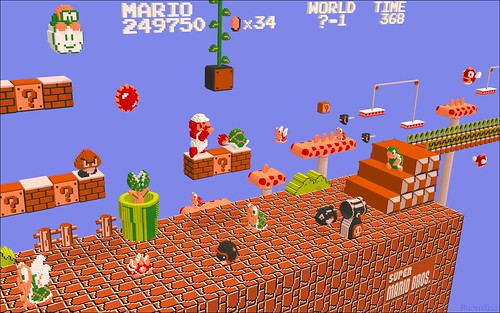 The idea for this post came to me right before I nodded off last night… This morning when I remembered, I was nearly crippled by the sheer weight of my task. How to quantify so many amazing games? Have I truly played (and beaten) every major Mario release since Mario Bros?! What constitutes an official Mario game?

Well, here goes… To qualify for inclusion, the game must have “Mario” in the title and be some kind of platformer. (Mario Paint and Dr. Mario are just a huge can of worms waiting to be opened…) I already know I’ll be committing sacrilege with some of my choices… but maybe that’s why I’m doing it.

Just know that this is an objective list, and once it is posted, it is as eternal as scripture. Miyamoto will frame this and put it on his wall, right next to that picture of Mario I mailed him when I was nine

[I wrote this starting at #1, so you might want to read it that way… since I lost steam at the end.]

This game was hilarious and jam-packed with goofy goodness. One of my favorite GBA games.

It’s weird, I was completely non-plussed by this game when I played it, and yet I still get nostalgic for certain levels. I’ll have to go back and try it again. I’ll never forgive the ridiculous plot (because all the other Mario plots are Shakespearean) but something about running around an amusement park on the beach, and through that hotel… come to think of it, there was something very Murakami about that hotel…

I’m not an RPG fan in general, but I’ve got to take my hat off to this game, for making it so darn fun. The humor that they brought to this series (which became Paper Mario basically) is pretty fantastic.

Super Mario on a Gameboy. What’s not to love? It was the first time we could take Mario with us to the crapper without lugging the TV and NES. Maybe this one should be higher on the list… I know my parents were glad.

I know, I know… this game is six places too low. Well, here’s my objective rationale. The year before Juan and I moved to Maryland, we had a summer of love with these two blonde twins next door. It was the summer after fifth grade for me, second grade for Juan. A new family had just moved in to our neighborhood, and boy were we delighted to find two hotties waving to us from the doorstep. We spent most of that summer waking up and heading straight to their house, ready to play Super Mario Bros 3 for eight to ten hours straight. Mario was our vehicle, our excuse for living in their room that summer. In between levels we’d listen to Tiffany or endure NKOTB. Otherwise, we were vicariously living the life of our little red-suspendered, mustachioed friend. And yet, it was hard to pay attention to this supposed masterpiece of a game when these two hotties were constantly flirting with us, and making us a feel a then-new emotion which we’d understand many years later to be ‘blue balls’. Mario 3 felt diluted. I learned an important lesson from that summer. Don’t play amazing video games with attractive members of the opposite sex. If I could turn back time, I’d gladly swap Mario 3 with a lesser NES game- maybe Chubby Cherub or Bible Adventures. That would’ve made for an interesting summer…

“Gravity.” That’s the pitch. A single word. God those Nintendo guys have flashes of inspiration. Every level of this game reduced us grown NES-generation men into children. Something about running around ‘The Little Prince’-sized planets with an interstellar plumber just did it for us. Just like all the games before it, you can tell that they whittled this game down until every minute was joy and wonder. I half wonder if they’ll release an expansion of Galaxy- it seemed that every level had a new brilliant idea that a lesser studio would have spun into an entire game.

I’m eight years old and I’m hanging out in Puerto Rico with my family. We go to my Uncle Rey’s house one night, and even as we get out of the car, I can see that the living room is lit with the glow of the TV. But nothing prepared Juan and I for what was going on inside. Walking into the living room, throwing ourselves on the couch, and watching our uncle play the first two levels of Super Mario Bros… I’ve never done heroin or crank, but I have to imagine it was something like that. It was like nothing we’d seen and it was so majestic and beautiful… I don’t think we left his living room for the rest of that month. His neighbor would come over every night with a bag full of toy cars, and would give us a car for every turn we’d let him take at the game. At the end of that summer we had all the toy cars we’d ever want, and had played through one of the best games of all time. If I ever write my own version of Summer of ’69, it might be about that summer…

Here’s where I commit sacrilege. Mario 2 before Mario 3?!? Mario 2 before the original?! Put the gun down- here’s my take. Apart from having a fascinating creation history, Mario 2 shattered our expectations of what a Mario game could do, or be. All of a sudden we could play four characters, we were in a world far more colorful and complex than Mario 1’s brick-and-pipe landscapes, and we were fighting crazy mutant rats with sunglasses and riding on whales. The gameplay and level design of this game is breathtaking, and I still find myself humming the theme song on the subway all these years later. Oh, and the hype for this game was deafening- the very first issue of Nintendo Power (which everyone under the age of 15 subscribed to in those days) was devoted to showing us glimpses of this soon-to-be-legendary game.

Sophomore year of college (yeah I’m old, shut up) I was helping a freshman move into her dorm, and she needed to buy a kiddie pool Toys R Us. (In retrospect, WTF?!) I have a very clear memory of walking into the store, and almost literally being knocked over by my first glimpse at Mario 64. For those who don’t remember, there hadn’t been a 3D game of note before Mario 64, and seeing it for the first time, our brains had to be rewired to allow for the possibility of this kind of gameplay. I stopped dead in my tracks and couldn’t get my eyes off the screen for hours. Playing Mario 64 was a revelation, and the fact that this game was both pioneering and one of the best platformers of all time is a testament to its greatness. It was the first time I felt completely lost in another world.

I’m not sure how it happened, and it shames me to the core, but I didn’t have the chance to play this game until it came out on the Wii Virtual Console last year. And oh my God did this game blow me away. It’s simply a masterpiece on every level. It makes you appreciate the art of level creation and game design the same way that your favorite novel makes you appreciate the art of writing. I remember being at work and daydreaming of Mario World- my hands would itch for the controller, and when I got home the console would be on before I put down my backpack. I was hooked on the plumber. I don’t even know where to begin preaching the gospel of this game, but since most readers have had the privilege of playing it, you know where I’m coming from. This was man’s small step, mankind’s great leap.