The Ultimate Break Up Mix 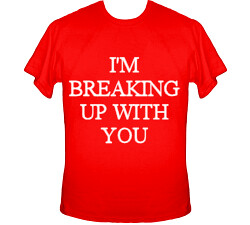 I’m not a vengeful guy, and I’ve never been in a relationship where I’ve had use for a malicious “Welcome to Dumpsville, Population: You” mix. But as a Hornsby-esque music obsessive, who has spent half of his adult life creating meaning from song lists, I appreciate the art of making a great break up mix. And, of course, I had to try my hand at it.

After all, how many mixes can be put to real life use? You’ve got your “I Think I Love You, But I Don’t Have the Balls to Tell You to Your Face” mixes, your driving/road trip mixes, your make out/make love mixes, and maybe your studying/sleeping ambient mix. And of course, the Everest of mixes, The Break Up Mix. A mix that must be perfectly selected and ordered, whispering the message subtly and gradually rising to a fever pitch of hatred and bile.

I spent two years (off and on) tinkering with this mix, between relationships. Just my luck that after making this, I went and found the girl of my dreams, who I’m about to marry. Terrified that my work would die with me, I felt the need to pass this on. Hopefully someone out there will find use for it. Actually, here’s hoping nobody does. I wouldn’t wish this on anyone.

[Mix after the jump.]

1. You Had Time – Ani DiFranco

Starting a break up mix with Ani DiFranco is key to catching your girlfriend off guard. Unless she’s a big enough Ani fan to know that this is her break up anthem, she’ll be lulled by the two minute instrumental opener, and won’t pay close attention to the mumbled, whipsered lyrics. Hopefully, if she’s paying some attention, she’ll catch a line like, “You are a china shop and I am a bull. You are really good food, and I am full” and dismiss it, but not before raising an eyebrow…

“Ani DiFranco followed by Cat Power! He must have made me a lullaby mix!” That’s right baby, a lullaby mix… Sure it’s a straightforward break up song, but by choosing a song from the opposite sex’s POV, you are once again refusing an easy interpretation of the lyrics. This usually means your significant other will disregard them, or at least refuse to decipher them. It will also make you seem more sensitive or “deep” which will make the ultimate message of the mix even more devastating as it dawns on her.

Here’s where the mind games come into play. “The Scientist” was obviously *the* break up song of 2002. But it’s also a Coldplay song, and hey- she might guess that you aren’t aware of its message, because guys don’t pay attention to Coldplay lyrics, right? But what if you are aware of its message?… The next song will dictate the meaning of the mix.

A song from an alternate future where the two of you are broken up! But the guy sounds miserable, and misses the girl… WTF? He can eat his dinner at a fancy restaurant, but nothing, nothing, can take away his blues! This is clearly a love song- but it’s about a break up- and it’s on after The Scientist… Now you have her completely confused.

Okay, its time for the first hearty wallop at your soon-to-be-ex’s heart. Here comes the excruciating truth, in these hard-to-misunderstand lyrics.

Hmmm… it’s dawned on her. No, it’s hit her like a truck. What to do except add fuel to the fire?

6. I Never Really Loved You Anyway – The Corrs

The title says it all. Ouch. Its one thing to fall out of love with someone, but this is just horrible. What did she do to deserve this from you? Cheat on you? God forbid you’re actually making this mix. God forbid you actually feel this way.

This song’s position in the mix is twofold. Firstly, you’ve come this far, and it’s time to lay it on thick. Secondly, it’s time to put on a band that doesn’t make you wince slightly for its inclusion. Because at this point she realizes what kind of a mix this is, so it’s time to lay off the Coldplay and Ani, and come out with the heavy hitters. Also, the fact that the title is an apology just hurts. “No offense, but I hate you.” Yeah, that’s no good.

A twisted duet where each singer screams “Wish me well, you can go to hell” with lyrics like “I just wanna punch you in the face” and great back-and-forths like “Say goodbye…” “Kiss my ass, I hope you die.” The finale really lays to rest any lingering questions your significant other might have about the details of the break up. “What happens if I want to call you next week?” “What happens is that I won’t be there because I don’t like you anymore. You’re stupid.”

9. I Was Only Kidding – Weird Al Yankovic

“When I said that I’d be faithful,
When I promised I’d be true,
When I swore that I could never be with anyone but you,
When I told you that I love you,
With those tender words I spoke,
I was only kidding- can’t you take a joke?”

I hope no one would actually stoop to this level of sheer brilliance.

Because you have to end it with class. And it doesn’t get classier than a seven minute Zeppelin ballad with sweet spanish guitar. And lyrics like, “Baby, its really growin, you made me happy when the skies were grey. But now I’ve got to go away” might lessen the sting of those last three songs.

Nothing tells her you feel her pain like this song, written by a female who just went through a soul-crushing break up. It repeats “Boy you look so pretty when you’re putting the damage on.” This might make her homicidal.

And there you have it. My humble posit in the world of Break Up Mixes. Please post your own, or additions/subtractions in the comments. And I wouldn’t even use this as a joke. I did, and it wasn’t pretty. Not pretty at all…

5 thoughts on “The Ultimate Break Up Mix”