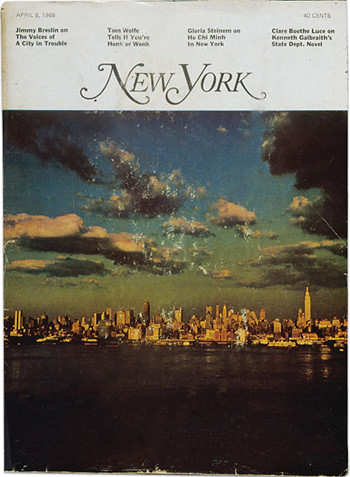 A two-week old issue of New York magazine was sprawled on my couch.

I’ve spent the past three weeks working long hours at a web start-up, so my entire life is an unapologetic mess. I spent the morning cleaning, when I found the magazine, without any idea how it got there. Usually my habit is to pile old magazines in drawers with the naïve hope that I’ll get around to reading them, but New York never fails to captivate, so I dragged it with me to my long overdue haircut.

And then after the haircut I did something I haven’t done in ages- just laid down and read New York for an hour. And it transported me.

The article was a retrospective on Clay Felker, founder of New York. It was written by none other than Tom Wolfe, harkening back to his bad-boy journalism days when he was one of the early magazine’s inner sanctum and key players. Rather than a bittersweet reminiscing, the article was a visceral thrust back five decades- Manhattan circa 1960- following the Missouri-born editor and his motley crew of reporters as they reinvented not only journalism, but the actual city of New York. The article name-checks Warhol, Arbus, and half of the 1960s New Yorkers who seem semi-fictional at this point, only because their lives seem so much richer, somehow, than we millenial Manhattanites.

What most interested me, though, was the way that Felker ran his magazine. The man prided himself on eating meals at home exactly never, instead using lunch and dinner to hunt for stories in conversations with Gotham’s upper crust. His typical work day involved running a magazine where he dictated story ideas to his staff, dipping into restaurants for meals as his form of inspiration. According to Wolfe, Felker pitched more story ideas than any reporter, and basically dictated the actual content of his brainchild. I can only imagine the importance of choosing the right dates for the dinner table, being that the content of one of the loudest magazines hinged on who Felker invited to sup on any given night.

What a novel idea on information gathering and exhalation! Thinking idly on it as I lay in bed, I couldn’t help but marvel at how similar it is to blogging. There we bloggers sit, eating all our meals next to our laptops (flip any blogger’s Macbook upside down to litter a desk with crumbs) choosing our websites carefully as we flit from blog to blog, absorbing and preparing to channel.