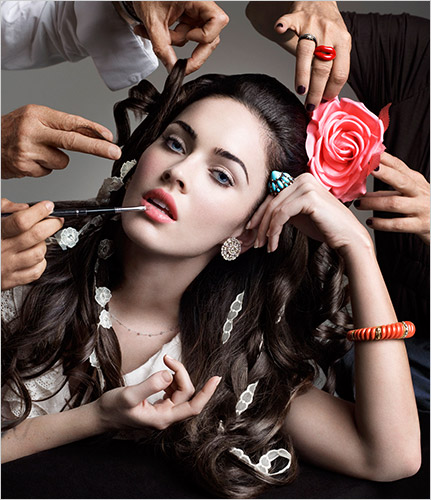 “…Fox has a quality that sets her apart: Fox is sly. Canny. A devoted student of stardom, past and present, she knows how to provide her own color commentary — a narrative to go with the underwear.”

Uh…<vigorous rubbing of eyes and forehead>

Okay. Far be it for me to take anything away from this colorfully sly underwear narrative, but something about this generous and rather imaginative portrait of Megan Fox, penned for The Times Magazine by Lynn Hirschberg, makes my hair hurt…you know, from the FIRE… in my MY BRAIN.

To be fair, neither Hirschberg or Fox harbors any delusions about the scope of her role in the public consciousness. She may rake in paychecks for her time in front of the camera, but Fox is primarily a professional starlet, the kind who gains fame for looking busty and playing manic on the stage of real life. That doesn’t stop Hirschberg from trying to present her as an alarmingly clever yet largely misunderstood and media-savvy iconoclast.

First of all: No.

Second: Comparing anyone to Hitler, even if it’s Michael Bay, is in no way a savvy thing to do.

Third: Reality TV is not a classroom.

Fifth: I present an offering of annoying/insane/confusing quotes from Fox herself, after the jump:

“It’s a testament to my real personality that I would go so far as to make up another personality to give to the world.” Seriously, who says shit like that?

“Sarcasm doesn’t translate in print at all. And neither does self-deprecating humor.” Um, yes it does. So does a total lack of personality, as it turns out.

“I’m not a tigress like Angelina. Of course, people want me to be. But I want to be the contradiction of that.” Really?

“They put me in six-inch heels and a stars-and-stripes bikini… Sent me to Michael. He approved me. Then they put me in the scene under a waterfall. You got $500 extra if you were willing to get wet, and I was thrilled to get wet. I was still a child, but for those two days I was being treated like a grown woman. I felt like I should be in a bikini dancing under a waterfall: that is where I thought I belonged.” It’s really awesome that Megan equates being a grown up with being half-naked under a waterfall.

4 thoughts on “Megan Fox Is Ridiculous”