Not a joke, people. This is for real. Say hello to the new Larry, Moe and Curly, courtesy of The Farrelly Bros. And it’s not a biopic about the guys who played the famous trio. This is an actual Three Stooges movie.

I’m not entirely sure how to feel about it. It’s weird… slightly unbelievable… but strangely intriguing. The idea of Sean Penn (Larry) and Benicio Del Toro (Moe) diving into slapstick like this is actually kind of spectacular. I love when great actors get cast against type. It fills me with selfish, cineaste glee. And if any two guys can vanish into a role like phantoms, it’s Spicoli and Fenster.

The only wild card is Jim Carrey (Curly). Because let’s face it, he can get tiresome. In fact, he’s been tiresome… for like, years. Seriously, the faces were sort of funny when we were 13, Jim. Find a new thing.

But word is, he’s pulling a ‘Raging Bull’ to ready himself for this one, which could either be a) helpful or b) totally creepy. For some reason, I’m reminded of an incident that involved a packed theatre, the trailer for How the Grinch Stole Christmas and a really frightened child, who burst into tears so loudly her parents had to walk her out of the theatre. Okay… that time it was kind of hilarious. But that was just makeup, people. Who knows what 40+ pounds will do to him?

So… I don’t know. Is this cool? Is it totally pointless? Maybe I’m just being led astray by this image: 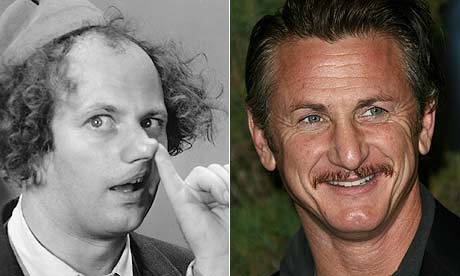