Oscar? Is that you?

In the wake of the 81st Academy Awards telecast, it has become apparent that many of us who reside on the colder end of the country, far away from the hallucinogenic fumes of Hollywood, have come to regard the ceremony with a variable amount of disdain. A small tragedy, in my eyes, since the awards are something I’m sure we have all, at one time, watched with a similar appreciation… back when movie stars were just movie stars; before weird (slightly terrifying) religions, the paparazzi, sex scandals, drug arrests, politics and of course, the shameless campaigning (thanks, Harvey). It was simply a night of celebration for the industry. And for those who would receive that iconic statuette, it was, in fact, just what every gushing acceptance speech still deems it to be… a humbling surprise and an honor.

Alas, times have changed. Some of it good, some of it inevitable and some of it deeply abhorrent.

Every year, the internal politics of the Academy seem to render the suspense pretty much non-existent. And the advent of awards as marketing lubricant to grease the wheels on the way to the bank, always seeps out of dear old Oscar’s pores, covering him with a gooey, disgusting film (haa. get it?) of corporate profiteering. It’s amazing anyone can hold onto that damn thing when they’re all emotional and crying and what not. And no, I’m not talking about the guy who won for Best Animated Short, who was endearingly awkward and adorable during his time on stage. After all, the screeners for those smaller categories (for those who don’t know, or didn’t read the rules that flashed on screen at the end of the telecast) are only sent to a select number of ‘informed’ voters (There’s no guarantee that they actually watch them all, but I’ll give ’em the benefit of the doubt).

I am, of course, referring to the big five. No, not the old “Big Five” studios of Hollywood. But the five major categories* that whip the entire town into a voracious, slightly unnerving, who-got-shut-out?!, what-will-they-wear?!, oh-my-god-jen-and-angie-will-be-face-to-face!! kind of frenzy. At this point in the season (and yeah, people really refer to it as a ‘season’. May as well show up wearing team jerseys, for crying out loud. GO! FIGHT! WIN!), with endless predictions of ‘front runners’ and ‘underdogs’, it’s only a little about the actual merits of the work. So, in the spirit of true consideration, here is my reading on this year’s winners, and I ask you all to weigh in, in kind.

I think the prevailing conclusion about this film was shared by many. MY GOD, PENELOPE. YOU’RE FANTASTIC IN SPANISH! This film definitely spoke to a part of my psyche that I have never been able to express: Christina and her longing for direction, so terribly unsure of herself and whether she has anything relevant to share with the world. Vicky, with her steadfast pragmatism and caution, at once a certainty… and a complete illusion. And Maria Elena, all fire and passion and an insanity that I found myself envying as I watched her. Portrayed by Miss Cruz, with such freedom, but with an emotional center that kept the performance from becoming an exercise in screaming. So lovely.

Okay, not gonna lie. It was nice to see this film represented at all at this year’s awards. I’ve met several people who just looooove to disagree: too hyped, not that good, blah, blah, blah. Listen. STOP. HATING. Few theatre outings have matched (or will ever match, I think) the experience of sitting in that packed midnight screening, watching this story unfold before my eyes. There is a longstanding sibling rivalry between the Academy and Box Office. Sometimes, it’s legit. Sorry, Will Smith, you don’t get a nomination every time your movie opens at #1. But sometimes, it’s just old-fashioned snobbery. Was Heath better than P.S. Hoffman? Better than Downey? Better than Brolin? (Sorry, I didn’t see Revolutionary Road, Michael Shannon. But I saw your ep. of Law & Order: SVU and you were great!) Well, let’s put ’em all in Joker make-up, roll the camera, and see what happens. We’d probably get something different from all of them. Every role requires something different, and every film tells a different story. Suffice to say, Ledger’s performance legitimately freaked me out and provided this film with a formidable villain. Bravo!

I mean no offense, Miss Winslet. I find you quite convincing and moving. And you did a fine job in this film. But I didn’t really feel this performance. The Reader tackles subject matter that is undoubtedly complex, and the aftermath that spills from the shame of an entire generation of people, an entire nation, is totally worth exploring. But it just didn’t grab me. And I have a feeling that maybe your best work is still inside you somewhere, waiting for the stars to align and bring you a role that doesn’t reek of I’m-desperate-for-an-Oscar.

It’s a conundrum for me, at times. It’s hard to ignore Penn’s penchant for pissing off, well… everyone. I see him commenting on war and politics, Cuba, New Orleans… often misquoted, but always angry about something. And it gets in his way. EXCEPT… when he’s acting. It’s truly remarkable. Sean consistently accomplishes what so many other gifted actors only do a handful of times in their careers: he disappears… he transforms. Wholly… with care and subtlety, conveying 27 different emotions all at once. I’m often left without words. Just the impact of a performance that I could watch over, and over again. When the list of nominees came out, I had two thoughts: 1) Man, how freakin’ AWESOME would it be if Mickey Rourke won???? 2) If Sean gets it, I’ll have no complaints. 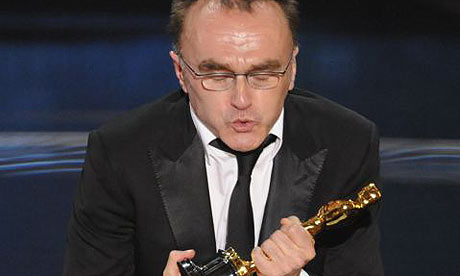 Um… I still haven’t seen this movie (lowering eyes to signify shame). People seem to agree that it’s a delightful film. But one friend I spoke to said that while it was definitely enjoyable, he didn’t think it was the best picture of the year. Thoughts? Comments? Please, if you have an opinion, I’m interested.

And since I didn’t see it, I can’t really comment on Danny’s win. Except to say this: I like his films and I liked his Tigger hop of jubilee when he won.

I will also say that I love that David Fincher got a nod this year. Button is not my favorite Fincher film, by any means, but it’s nice that the Academy can acknowledge that he’s not just a dark twisted guy who makes dark twisted films about dark twisted people, that only appeal to dark twisted men. In my opinion, none of those things are true.