Merry Christmas everyone – in honor of this special day, I thought I would get into a serious discussion: what constitutes a good, Christmas themed, fashion decision? Now I admit, I haven’t participated in this tradition as much as I feel I should have… I think one of my New Years Resolutions is going to be to start participating in holidays a little more…

People have a love hate relationship with the Christmas Sweater – they can be funny in that ironic mustache kind of way, but they can also be horrific in that uncle Bob who sweats to much, smells like corned beef hash, and likes to make uncomfortable comments about how your sister has really grown up these past few years kind of way… I personally dislike the Christmas Sweater as a matter of fashion principle… but I appreciate the audacity of the choice, so it clocks in at 10.

Given the sheer amount of terrible Christmas Fashion out there, the next couple things are going to be more hate than love. Christmas Earrings are ok – as long as they’re tasteful – but in general, I have a problem with Christmas Jewelry. It’s almost always ugly, and it usually has some kind of tacky enamel holly leaves or stupid plastic snowman. I think we should just let it all go…

Does this dog look happy?

While not technically a human fashion statement, this makes the hate section of my list for a variety of reasons. First of all, I cannot stand dog clothes. If dogs wanted clothes, they wouldn’t have fur. They also wouldn’t constantly chew up the clothes they have – or try to rip them off. If you have to train a dog to wear clothes that have been specifically designed to be difficult for them to get rid of just because you want to take a picture of them that you can send to you’re email list of other sad people who are dressing their animals in stupid costumes, you have a problem. The dog doesn’t want to wear these things, so what does it say about you that you feel the need to impose your will on a helpless, 20 pound animal? Because of a sweater! A SWEATER ON A DOG. THIS IS NOT WHAT NATURE INTENDED.

I don’t have kids, and I know this is diametrically opposed to the above rant about dog clothes, but I fully support dressing children up in traditional Christmas clothes. They may tug at the ribbons and all that stuff, but come on – it’s kind of cool to have one of those funny Victorian Christmases with a fire burning and hot apple cider mulling on the stove and all that. Trust me – they’ll appreciate it later. Or not. But in the end, rebellion against one’s parents is a natural and necessary part of adolescence. If they’re going to hate you for something, you might as well make it something interesting… 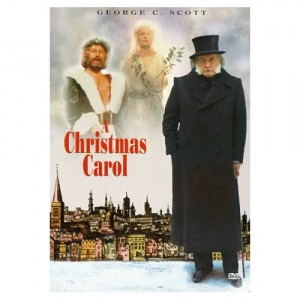 Yeah… I kinda think Scrooge was the man. His particular brand of anti-Christmas fashion should come back into style – it’s a sort of a – restraint makes the payoff better – type of thing. Who doesn’t want to be dressed like an old miser, then go through a profound life altering series of events, and then run around the streets of 19th century London experiencing Christmas like a kid again? I think I’m going to plan for that next year…

Yes. These exist. And while this totally goes against all my opinions about not supporting ironic fashion statements, I kind of like it. Sue me for inconsistency.

Classic – great for getting up on Christmas morning without stopping GO or collecting 200 dollars. With a good pair of Christmas pajamas, you can make it all the way to two or three in the afternoon before you put on real clothes…

I fully support any attempt to turn fun cherished childhood holiday memories into sexy times. This obviously includes Halloween, but lets throw in Fourth of July (sexy baton twirling patriotic cheerleader), St. Patricks Day (sexy drunk Irish girl), Thanksgiving (help me out here cause turkeys really don’t do it for me, and sexy pilgrim doesn’t help much either) – even Columbus Day! (I think a captains hat could work) Sexy Easter bunny might be a little sacrilegious… but hey – some people go for that too.

We can make this happen… we are the ones we’ve been waiting for. 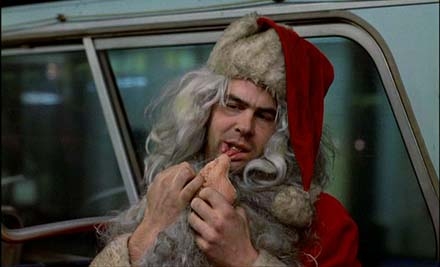 The Santa Suit is pretty damn awesome. Anyone who shows up at a Christmas party decked out in full Santa regalia should be lauded and immediately offered shots. However, this brings up a secondary point – the Santa suit has the highest potential for a crash and burn. This is why I couldn’t rank it number one… this point is demonstrated in the best Christmas movie of all time – Trading Places. Santa will never be quite the same after Dan Aykroyd pulled an entire strip of smoked salmon out of his nasty ass santa suit and ate it before he pissed himself. And people wonder why kids have a hard time believing in Saint Nick anymore…

Not to mention this horrible tragedy that happened just last night: a Gunman dressed in a Santa Suit walked into a Christmas party and sprayed the crowd – killing three people. Not cool at all. Maybe Santa Suits aren’t such a good idea… (UPDATE – This story got even worse: “Man in Santa suit kills at least eight at Covina party, police say“)

PS – the Santa beard and hat look without the rest doesn’t cut it for me. I know, I know – people should get some cred for getting into the spirit of the thing, but come on! If you’re gonna go, go all the way.

This may seem like a cop out – but I actually have very strong feelings about this. Most people aren’t willing to go all out on Christmas. People are often hesitant to wear some of the items lower on this list – myself included – which usually means that the Christmas spirit isn’t fully celebrated or appreciated. I think this needs to change, and I think Christmas socks can change it. You don’t have to dress up like Santa or depress yourself by wearing something horribly ugly – all you need is that hint of Christmas cheer peeking out from under your pant leg. Subtle, classy… just right. Plus, you can proudly display them in the morning when you first sit down for presents under the tree. You’ll be cheery when everyone looks like they’ve been hit in the face by a shovel as the blearily sort through stocking stuffers and eat chocolate oranges and candy canes. Socks take almost no effort to put on – they’re warm – and they’re cheap. Besides, I think socks are an underserved part of average persons wardrobe. This needs to change.

About the author Chris Baily

Chris Baily is Chief Strategy Officer and Co-founder of Pure West. He is an acclaimed designer and strategist, most recently for Shorefire Media and Belgrave Trust. He designed and developed Aristotle Circle featured in the New York Times, and re-built Sharp Entertainment’s CMS from the ground up. Prior to his position at Pure West, Chris was Director of Marketing and Brand Development for the National Economic Opportunity Fund from 2004 – 2008, and was responsible for business strategy and new media implementation. Chris received a Bachelor of Fine Arts from Cornell University, where he was awarded the David R. Beane Prize for excellence in the Fine Arts. He has also received a Presidential Scholar Award in the Arts and he was an Arts Recognition and Talent Search (ARTS) Awardee, and his artwork has been displayed in New York, Rome, and at the Smithsonian National Portrait Gallery in Washington, DC.