Versus: The Most Nonsensical Superhero Battles 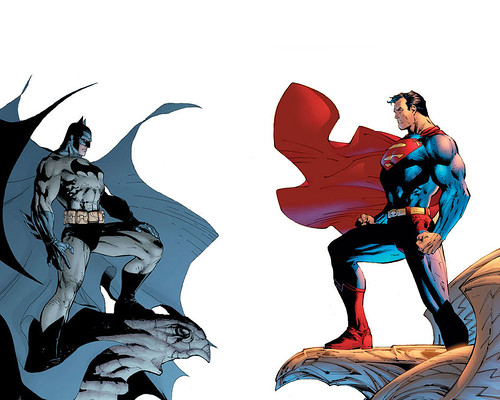 Often I wish animals would learn to speak and become citizens, not because I want a monkey butler, or would dig having a bespectacled rhino as a boss, but because I’ve always wanted to see UFC: Animal Edition. Who would really win in a battle between a bear and a shark? What if you threw a crocodile into the mix, but the bear could tag in a rottweiler? Or how about a subtle match, like badger versus a beaver or a water fowl battle royale? These are the questions that keep me awake at night.

Until then, I understand that we have to let our imaginations run wild in a more PETA-friendly vein. (Hell, I’m a huge pacifist, but if animals could speak and articulate being pissed at each other, it’d be their right to brawl it out!) So until then we must rely on comics (or the WWE), America’s chosen medium, to satiate our curiosity about who would win in a fight between X and Y.

And then sometimes, in the interest of sales or because of an epic lapse of judgement, comic book mavericks completely mismatch superheroes… and come up with these ridiculous battles.

Okay, I get this from a marketing angle. Marvel, you give us your most popular superhero, we’ll pit him against ours. But, seriously- how else would this go? If Superman was really pissed at Spidey, his only decision would be how to most effectively channel his rage into a creative and satisfying murder. Would he choose a punch to the skull? His laser-eyes to Spidey’s brain? Turning back time thirty years and convincing Peter Parker’s mom to get an abortion? The decisions are limitless. As soon as he makes his epic choice, the battle is immediately over. Metropolis- 1, New York- 0.

Take Spiderman, take away his super strength, his crazy agility, his web-slinging and Spider-sense, and give him a couple of metal bat-shaped boomerangs. Then pit him against the most unstoppable superhero in the universe. How is this even a question? How do people even argue this? Sure, we all like Batman better, but lets not let sympathy get in the way of cold, brutal, Kryptonian logic.

Not sure if this is a comic yet, but I don’t understand the fascination with this hypothetical battle. Do people not understand- this is NO CONTEST. As soon as I finish cobbling together my time machine, my first duty will be to transport a slew of ninjas to the Carribean, and let them loose on a pirate ship. I’ll go 2 billion to 1 odds for the ninjas. The only real question would be how the ninjas would entertain themselves thirty-five seconds after I dropped them off, after waping the walls with a bunch of inebriated freebooters.

I’m sorry if I’m being a little too general here, but if I woke up tomorrow as a super villian in the Marvel or DC universe, I could probably take out my arch-nemesis in a couple of days. OPTION ONE: Step One: find out if your arch-nemesis is invulnerable to bullets. Step Two: purchase a sniper rifle. Step Three: find your super hero. Step Four: Snipe that mo-fo. Bullet to the head. End of story. OPTION TWO: Let’s say your arch-nemesis can withstand bullets. Step One: Hire a hot girl to bump into your superhero at a bar. Step Two: Have her slip a roofie into his appletini. Step Three: Go to town destroying your slumbering arch nemesis.

This would probably take care of 99.999% of the super heroes out there. The only exemption I can think of is the gay Canadian superhero, Northstar, member of Alpha Flight. As he would not be wooed by a lady nor killed with a bullet, I dub him the most powerful superhero of all time. Long live Jean-Paul Beaubier!

2 thoughts on “Versus: The Most Nonsensical Superhero Battles”