New York City is one of the best places in the world for all kinds of art. As I’ve found in my travels around the city, you don’t need to be inside a museum or gallery to find great and interesting works. Where can Picasso, Big Pun and the Q Train come together? My top ten New York City public art installations, that’s where!

The Botero sculpture of Adam in the Time Warner Center has certainly rubbed NYers the right way. Or I suppose, actually, it’s the other way around. Apparently the thing to do is to grab Adam’s junk. Look closely at that particular part of the sculpture. It wasn’t created that way by the artist. It has turned gold from all that touching and grabbing.

In a South Bronx lot sits three enormous sheets of an un-assembled Richard Serra sculpture. The sheets have been there for years and no one with any knowledge about who owns it is interested in discussing who owns it. Nevertheless, there it is – an artistic symbol of industry, in a lot built to house cranes and other industrial equipment. 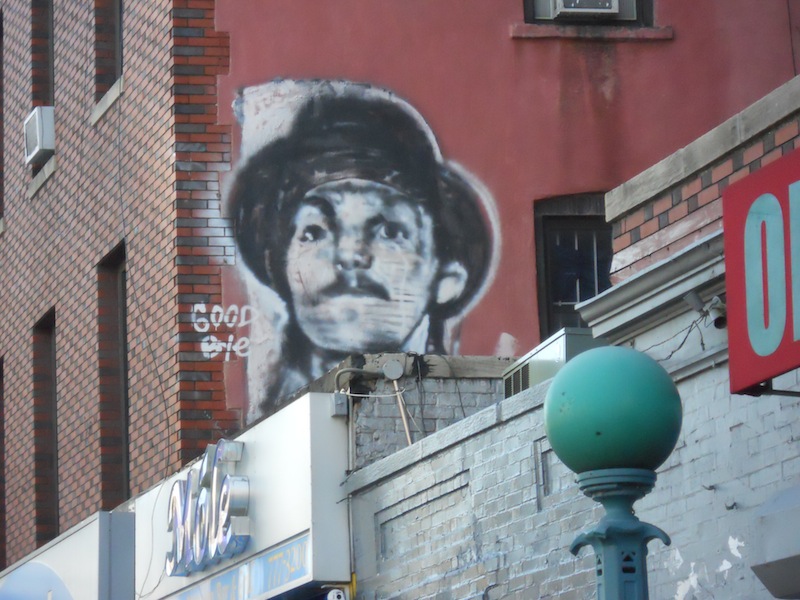 Just off the corner of Houston Street and Allen Street is this portrait of deceased artist Dash Snow. Snow was 27 when he died in 2009. He was the subject of a profile in NY Magazine in 2007. The writer of that profile opined that Snow, at 25, was already a downtown legend. This portrait is the second of Snow by the graffiti writer SEEDR. SEEDR did the first one on the roof at Deitch Projects, for a 2007 exhibition tribute to Snow’s work. Given how associated Snow was with the latest incarnation of the downtown scene, it’s only fitting that his portrait would be rendered in aerosol on brick at the corner of two important LES streets.

Ever heard of North Brother Island? It’s an island on the East River that has been abandoned for 48 years. Three urban explorers, from the Sanctuary of Hope, formerly an antinomian church in Ridgewood, Queens, have been there several times. During a recent visit, they installed the awning of the SOH onto one of the abandoned buildings there. In this way, the Sanctuary of Hope has been deterritorialized (in material) to North Brother Island. The installation of the awning notes a human presence on a deserted island and shows the transformative power that even the simplest of additions can provide to any place. 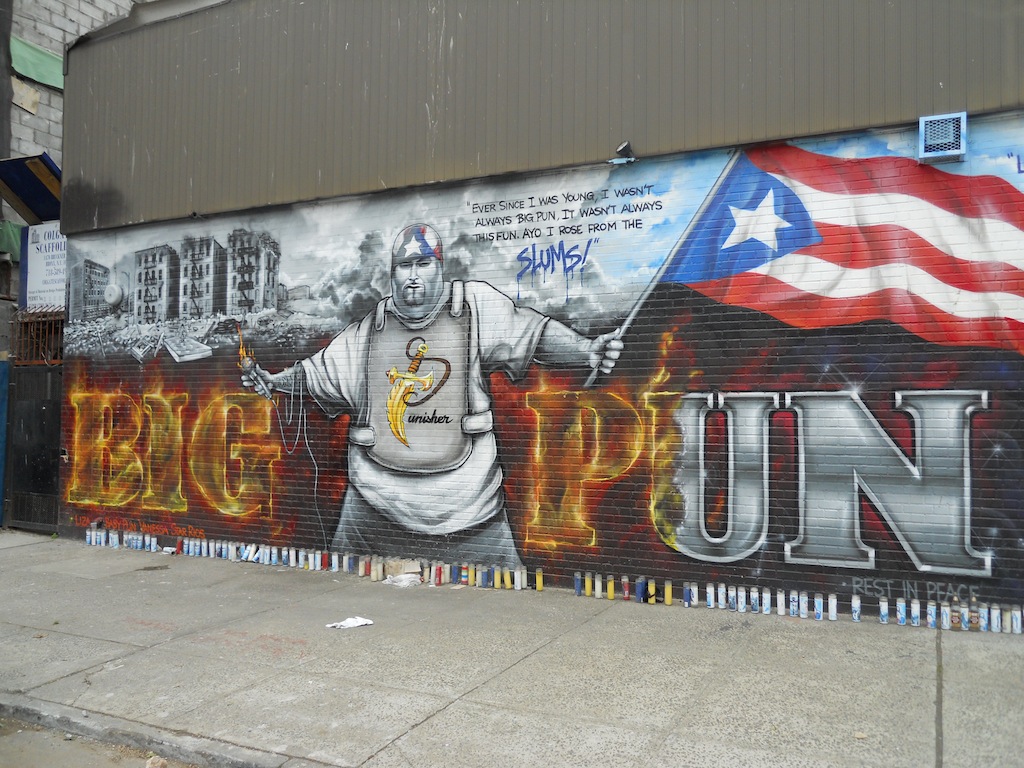 A wall at Rogers Place and 163rd Street in the Longwood section of The Bronx is a gallery at which the artwork rotates like the art on the walls of Gagosian, Marlborough or Pace. But no matter how many times the artwork changes, the subject is the same: Big Pun. The Bronx rapper, who died on 2/7/00, was cremated, so the mural offers his fans and family an opportunity to visit and pay their respects. The mural was created by TatsCRU and has been repainted almost every year since Big Pun’s death. Each time it is rendered in a different way. A rep from TatsCRU informed me that this year they plan to do a new version of it beginning on May 10. There is currently a movement to get the corner of Rogers Place & 163rd re-named after the deceased rapper. I visited the site yesterday and took the second picture. The top one is from 2009. 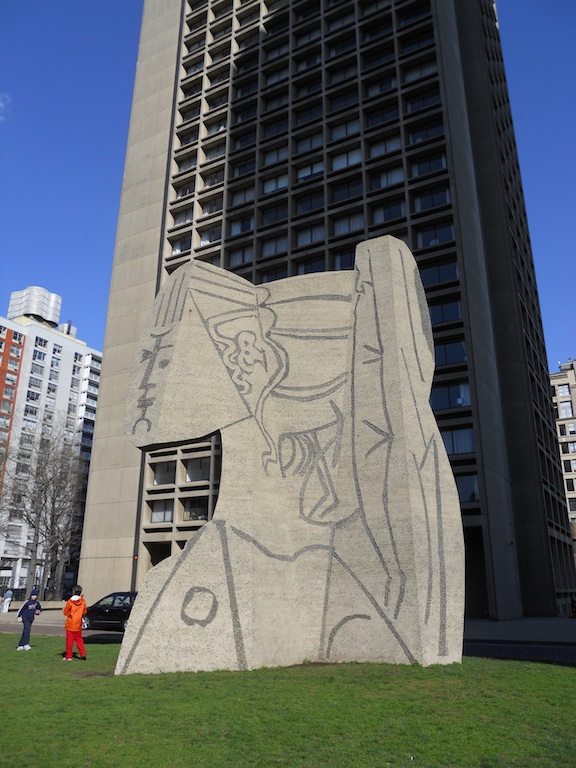 Picasso never once entered the United States during his lifetime, but his presence in New York is felt in museums and galleries and by this large sculpture in Greenwich Village. It is located between Bleecker and Houston in a courtyard within Silver Towers/University Village, a complex designed by I.M. Pei. The sculpture is called “Portrait of Sylvette.” Sylvette David was a girl who lived in the South of France and met Picasso around 1953. This sculpture was created from a drawing Picasso did of her. If you haven’t seen it yet, you can rest assured that it will be there for sometime to come: in 2008, the entire area was officially designated by the NYC Landmarks Preservation Commission. The case for making the entire area a designated site was even supported by Sylvette David, who is now in her 70s.

“The Sphere,” by Fritz Koenig, was on display for 30 years at the foot of the World Trade Center. Though it sustained some damage on 9/11, it remained intact, albeit for some dents and holes. Once it was retrieved from the site it was placed in a temporary storage area at JFK airport. Percy Adlon, a filmmaker, made a documentary about the sculpture called “Koenig’s Sphere,” drawing attention to its presence at JFK. By March 2002, it was installed in Battery Park. The damage sustained that day is clear by looking at it. With its holes and dents, “The Sphere” is very much a metaphor for New York City; like the City “The Sphere” was changed and scarred from 9/11 but survived nonetheless. 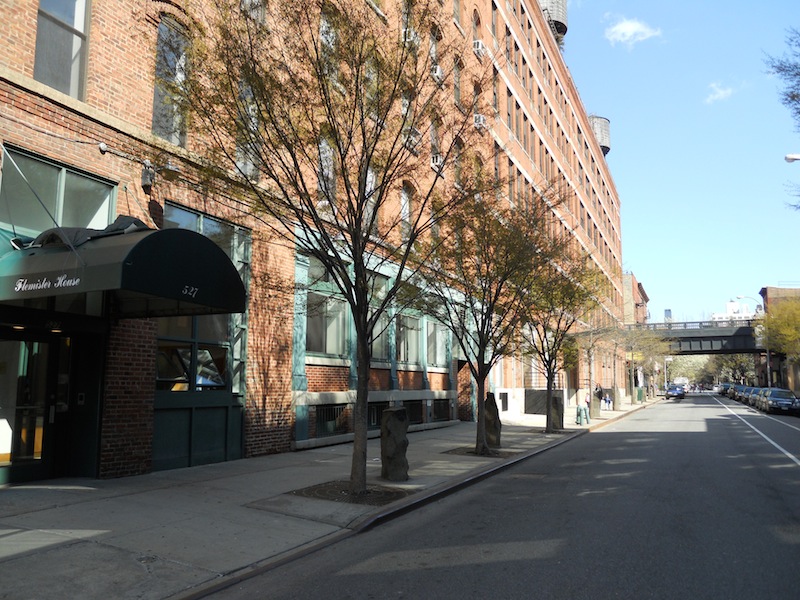 Both sides of West 22nd Street between 11th and 12th Aves are dotted by several types of trees. What makes the trees at this location on W22 unique? They were all planted by the Dia Art Foundation, in 1988 & 1996, as a part of Joseph Beuys’ 7000 Oaks project. Beuys began the project in 1982 in Germany and did it as an extension of his idea of “social sculpture.” Each tree is marked by a basalt column. I was there the other day & I stopped to chat with a man who was selling art for someone else near the 11th Ave side of the street. The man (on the right above), who would only identify himself as a “part time Siciliano-mafioso” knew nothing of Beuys or why the trees were there. He did tell me a story about a boy who leaped from a tree, though. Across the street, I stepped into the clothing store “Comme des Garcons” and a very friendly young woman told me that she knew nothing about the project either. In a way, that’s really the brilliance of the piece. That here on W22, amongst galleries, residences & chic stores, the trees blend in. They are just there, living monuments to the very idea of public art.

“Crack is Wack” by Keith Haring is arguably one of the most famous murals in the City. It is located at 128th Street and 2nd Ave in Manhattan and visible from the southbound side of the FDR. When Haring did this mural in 1986, he didn’t have anyone’s permission to do it and thus it was illegal. Now it is a protected site by the NYC Parks Department – the dream of many would be graffiti writers and public installation artists.

The final work I’ve decided to include is Bill Brand’s “Masstransicope”. I took two trips on the Q train the other night to view this piece. I love that it requires a trip on mass transit and that en route riders are treated to a physical flip book. Brand did this piece in 1980 and created it by installing 228 hand painted panels in the route between DeKalb Avenue, in Brooklyn and Canal Street, in Manhattan. To see it in person, visit the Dekalb Avenue stop and take the Manahttan-bound Q train. When you board the train, look out the windows opposite the side of the train you entered. About a minute or so into the ride, Brand’s piece appears.

About the author Christopher Gorman