I can’t remember exactly how I was led there, but thirty seconds after landing on @discographies, I was smitten. The concept is as simple as its execution is Herculean: condensing a musician’s entire opus into 140 characters, with usually hilarious and dead-on results. I’d say that @D is the Shakespeare of Twitter, except that his process is more like James Joyce, writing a word a day (see question #4 and be humbled).

@discographies is also as secretive as can be. Usually I like to pretend that I’m meeting my Popten interviewees for cocktails at their penthouse, questions and answers batted back and forth between sips. But if this weren’t the internet, I think my interview with @discographies would’ve required me to hire a PI, leave a note with @D’s landlord, meet him behind a supermarket at 3am, and take sloppy notes as he fed me terse answers in a raspy, unidentifiable voice. (Of course, there’s the distinct possibility that @discographies is a woman.)

But this is indeed the internet, so tracking @discographies down took all of one tweet, and requesting an interview took less than 140 more characters. After his/her most gracious green light and an email to a mysterious address, here we are. Lovely to find @discographies as eloquent a long-form writer as a microblogger. Though I still have no idea who he/she is.

1. So who is @discographies? Are you a person, a committee? Do you have a secret identity?

2. When and where did the idea for @discographies hit you?

I wish I had a more exotic origin story for you, but: I was standing in a long line at the drugstore waiting to pay for some contact lens solution and “Come On Eileen” by Dexy’s Midnight Runners was playing in the background. I hadn’t heard the song for years, and there was nothing for me to do but stand there and listen to it. I started thinking about Dexy’s Midnight Runners: they’re remembered in America as one-hit wonders, even though they made three distinctive albums which are all worth hearing. I decided to say something about them on Twitter–in my secret identity, I’m on Twitter–and I began wondering idly if I might be able to sum up all of their records in 140 characters. That was my “eureka!” moment. By the time I got to the cash register with my ClearCare, I had written the first tweet and the idea for @Discographies had fallen into place.

3. How long does it take you to come up with each tweet and what’s the process like?

Some are instantaneous. Most of them get worked on for a few days. One or two have taken weeks of endless rewriting and despair.

Many of the discographies are attempts at describing an arc, so that means I’m always having to ask myself: “what is the essential aspect of this band?” Once I’ve got that figured out (even if I change my mind about it later), I start writing.

4. What’s the longest it’s taken to compose a single tweet?

The David Bowie discography took about a month from first draft to final posted version. There are a few others that have been in progress for nearly that long that I’m still tinkering with. But those are outliers; very few have taken more than a couple of days to nail down.

5. Do you find yourself digging into a band’s entire discography to come up with each tweet?

Always. @Discographies is meant to be entertaining, but it’s entertainment that’s very much grounded in the experience of listening to records and trying to make sense of them. With artists whose albums I already know backwards and forwards, I don’t feel the need to go back and re-hear everything. But I try to be thorough, even if that means listening to things I’d rather not listen to. Among my recent acts of selflessness: I made a point of checking to see if the late-period Metallica albums were as dull as I remembered them (they were), if David Bowie’s “Never Let Me Down” was as abysmal as I recalled (it was) and if Kiss’s “Music From The Elder” was as ludicrous an attempt at a concept album as its reputation suggests (it is). And I spent half a day listening to the complete Britney Spears catalog hoping to discover signs of life. Is any of this detectable in 140 characters? On the surface, probably not. But it’s a necessary part of my process. 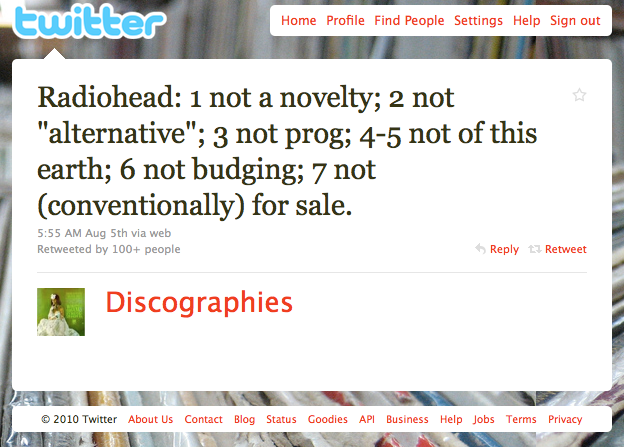 6. Are there one or two you’re particularly proud of?

I like them all, but I’m fond of some of the not-so-funny ones that sneak out every once in a while, like LCD Soundsystem or Big Star/Nick Drake. They’re not huge crowdpleasers, but it’s important that the discographies come in as many different flavors and colors as possible.

7. Are there any bands too intimidating to touch?

In the sense of “their music is so sacred and perfect that I do not dare to utter a single word about it”? No.

In the sense of “I’d rather not have to deal with their enraged fan base”? Insane Clown Posse.

In the sense of “I really want to do this but having to identify and then correctly number all of this artist’s studio albums before writing anything will be a horrible ordeal”? Miles Davis.

In the sense of “I guess I have to contend with this group I’ve never been all that excited by but to do so I’ll need to force myself to listen to all of their albums”? [Name of famous and overly prolific band redacted].

The 140 character limit is what makes all of this possible. It imposes a structure that’s both arbitrary and necessary, and, just like someone writing a haiku or a villanelle, I have no choice but to work within that structure. @Discographies is about cramming a lot of information into a very small space. Thinking up new ways to utilize Twitter’s boundaries for my own fiendish purposes is a big part of the fun.

I’m enthralled by the curmudgeonly genius of @Holy_Mountain. And the comedy duo of Tom Scharpling (@scharpling) and Jon Wurster (@jonwurster) are constant sources of hilarity and inspiration, both on Twitter and on the radio.

11. How often do you find yourself composing tweets in your head, away from your computer?

Constantly. The Weezer discography, which is the most re-tweeted thing I’ve written, came to me fully-formed while I was stretching at the gym. The Interpol discography was the product of a long walk on a Saturday afternoon. The Britney Spears discography popped into my head about 30 seconds after waking up one morning. In all of those cases, I’d been thinking about (and listening to) those people for a few days beforehand. It’s nice when you can delegate some of the work to your subconscious.

12. Do you have writer’s block for any band? Are there unfinished tweets you’re tinkering with?

I don’t have writer’s block, but there are bands I’ve been working on that I haven’t succeeded in pinning down yet. When that happens I move on to something else and try again in a few days. There are also unfinished tweets that end up marinating for a while because the underlying concept is sound but the word choice isn’t quite there yet. The margin for error is nonexistent at 140 characters, so I want everything to be as sharp as possible. If I leave in an ungainly phrase that disrupts the rhythm of the tweet, I’ve failed. For the last few days, I’ve been fussing over a discography that’s complete except for a segment where I need to find a better way to express something in about 15 characters. And the way I fill those 15 characters will make or break the discography. So I’m content to wait until the right words arrive. 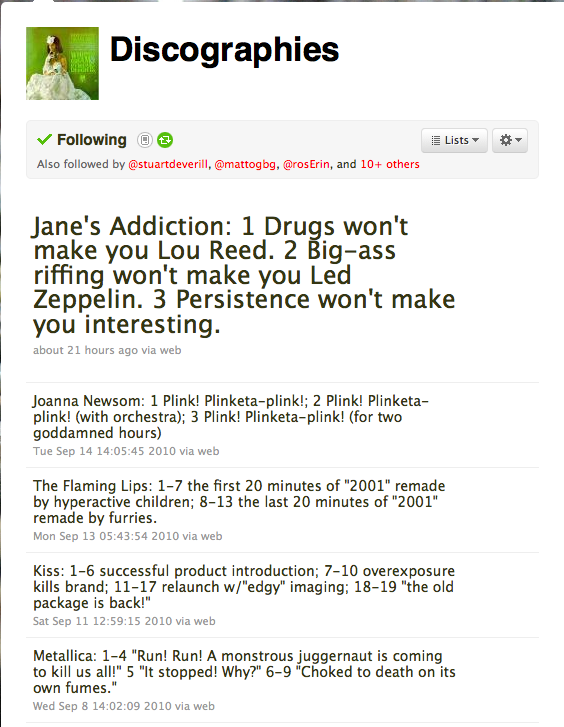 5 thoughts on “Interview with @discographies”