On Valentine’s Day weekend I was far from my girlfriend at the University of Michigan filming a 48 hour game competition. Guess who else was there? Hint: Sid Meier. The legendary game designer responsible for Civilization, Pirates!, and dozens of other games.

24 students broke off into 9 teams to compete against each other for 2 days to see who could make the best video game and be judged by the guru himself. The competitors developed concepts, lost sleep, coded up until the very end, and waited anxiously for the results. You can watch how it all went down in the video I made with Peter Brauer. When it was all said and done Zoo Escape, by Brian Ford, Billy Laurain & Tony Ghita won. I caught up with the 1st place winner of the competition for a quick Q&A. 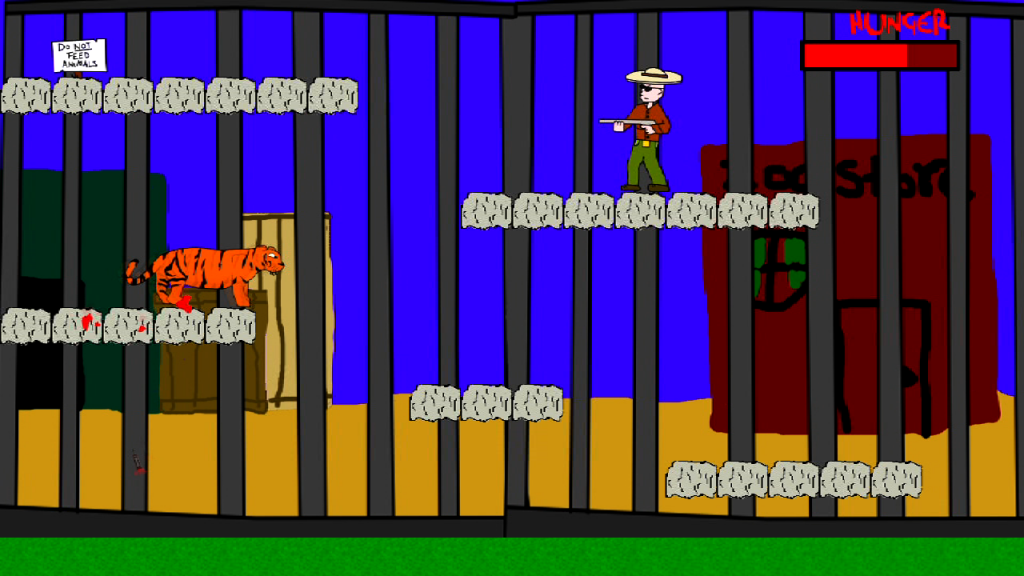 P10: When did you make Zoo Escape? Where did the concept come from?

Tony: It manifested from all sorts of crazy ideas that we were having fun with. Somewhere in between USSR space robots and prison breaks the idea of playing as a tiger who had to escape from a zoo evolved. 47 sleep deprived hours later we had a semi-finished game.

Billy: Zoo Escape came out of about 2 hours of sleep deprived brainstorming. We had a lot of ideas but only a few of them were in the realm of possibility given our experience and time restraints. We decided to go with a platformer and the idea wasn’t completely formed until about half way through the competition.

Billy: I think what makes our game fun is the personality it has. We made our own sound effects and artwork and gave them all a very non-serious feel, allowing people to laugh at our game and all of its oddities.

P10: Could you tell me a little about the competition?

Tony: A theme was given at the beginning of the 48 hours, and each team had to then incorporate that into their game. The theme this year was “Restraints”, and so we have to be creative about making some game mechanic that fits in with this.

P10: What school do you go to and what are you majoring in?

Tony: I’m currently a sophomore at the University of Michigan concentrating in computer science. I’m an aspiring game developer.

Tony: I grew up tinkering with computers and playing video games, and loving both. I guess I really locked onto game development when I realized that it was possible to merge the two as a legitimate career.

Billy: Strangely enough, it was listening to the podcasts for Bungie game studios that made me think this might be the career for me. That and all the endless hours I spent making ‘movies’ with my friends in Halo 2.

P10: How do you think indies and small teams are impacting the game industry?

Billy: Right now indie game companies are having their largest impact on the game industry ever, for many reasons. Distribution has finally been made seamless by services like xbox live and steam, and some of today’s best games are either 100% independent or started off as independent projects. There will always be a need for small team games with a more personal feel, and the big budget games that appeal to the masses.

Tony: The smaller games are a reaction to the huge AAA games. Indie games can offer gameplay that no AAA title would dare attempt, while smaller games offer less of gaming experience to those that aren’t looking for some 20+ hour involvement. They serve to balance the industry’s “ying” and “yang”.

P10: How did you get involved in Wolverine Soft (the gaming club on campus)?

Tony: I got involved last fall. By chance, I made it to one of the first meetings where everyone pitches a game idea they’d like to develop. From there, everyone gravitates towards the idea that they’d like to work on. While working on a horror/survival game two of the programmers on the team and I banded together to give this year’s 48 Hour Game Development contest a shot.

Billy: I’ve been somewhat involved in Wolverine Soft for a year and a half now, but this is the first year I have been on an actual game team. Our team met while working on another Wolverine Soft project but ever since the 48-hour competition we’ve been focusing on this game.

P10: What was used to make the game and what tools aided in development?

Tony: We programmed the game in C# using Microsoft’s XNA framework. The artwork was sketched onto paper using a #2 pencil, scanned, and traced over using InkScape, an open source vector art program.

Billy: GIMP and Inkscape are all free programs and work fairly well for game development. We were also lucky enough to accidentally discover a sound booth downstairs to record some professional sound effects for the game.

P10: How did you come up with the visual style?

Tony: The visual style is pretty crappy; the graphics were all hand drawn. If I could’ve drawn better, the visual style would’ve been much more slick. I probably should’ve learned some animation techniques before the contest. That way, some of the undesired “swagger” the characters have could’ve been avoided.

Billy: The visual style was more of a result of our shortcomings as artists than anything else, but we all agreed to use a ‘cartoony’ feel, with thick black lines outlining our characters. I think this gave people the ability to freely laugh with the game as they played it, instead of trying to take it seriously.

P10: What’s the best part of winning something like this?

P10: What prizes did you claim?

Tony: Billy and I won some Farmville t-shirts for having stayed up the longest out of anyone else on the first day. I picked up Mass Effect 2 as the prize for winning the competition.

Who are your game designer heroes/role models?

Tony: All the old boys; Shigeru Miyamoto, Will Wright, and Sid Meier of course. I also admire Peter Molyneux’s ability to communicate his vision and passion for his games.

Billy: Obviously Sid Meier has had a huge influence on me since he has taken the time to come and teach us the ins and outs of game development for two years in a row. Right now I think Gearbox Software is doing great things, but my real role models are the guys from Rooster Teeth. Although they aren’t game designers, they have played a huge role in all the game related things I’ve done.

What was the most important lesson you learned during development of this game?

Billy: The most important thing I learned was to set firm deadlines for different parts of the game. Once we went over a deadline and started tacking things on, other parts of development had to be cut to meet the overall deadline.

Billy: During the competition we called ourselves “Fort Awesome” because we literally made a fort in the back of the classroom to develop our games in. We have since changed our name to “Evil Lair Games” for all future projects.

P10: Are you all going to make more games together?

Tony: It’s highly likely, Brian and Billy are good guys. I’m constantly coming up with new idea’s that I’d love to play. I’d like to get a couple of them done over the summer.

Billy: Me and Tony are currently working on the finishing touches for Zoo Escape and hopefully it will be released to Xbox Live Indie Game Marketplace very soon, so make sure to check it out! We have alreadystarted the beginning steps of planning for a summer game for Evil Lair Games, but more on that later.

1. To watch the video of how it all happened click here.

3 thoughts on “Q&A with the winners of Sid Meier’s game competition: Zoo Escape”